Spring can’t come fast enough outside but at least the produce I’m starting to see in the markets tell me it’s around the corner. I bought a pint of figs and thought about this great spring salad that’s usually matched with toasted kale. I used the mache I had in the fridge instead but feel free to use any mixed greens.

This is the first time I’ve ever peeled golden beets before roasting them. It was more work, but less messy later and it stops you from double-guessing if they are tender enough after 25 minutes in the oven. You can see they’re good to go since they’ve already been sliced.

When plating, act like you’re a chef on TV and smear the ricotta with the back of your spoon–it makes for a great presentation. 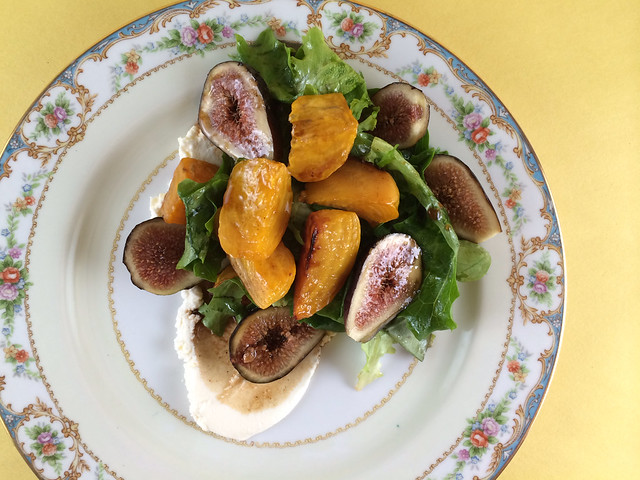 1. Preheat your oven to 425º. Toss the beet wedges with some olive oil and sprinkle them with salt. Spread them on a baking dish and roast until tender, about 25 minutes.
2. In a small bowl, whisk together balsamic vinegar and the maple syrup. When the beets come out of the oven, toss them with some of the dressing. There should be some olive oil coating the beets. If not, drizzle a little more olive oil.
3. Assemble your salad. On a plate, smear a spoonful of fresh ricotta using the back of a spoon. Create a bed of greens and then top with the dressed beets. Add the figs and drizzle some more of the maple syrup-balsamic vinegar dressing all over for a little sheen. Season with some pepper and serve.