I was looking for inspiration to make use of the last fresh burrata I bought from Arthur Avenue and the $5-a-bunch asparagus that are populating grocery stores at the moment. I saw some pretty photos on foodiecrush that caught my eye so I went to work and created my own version with the ingredients I already had. 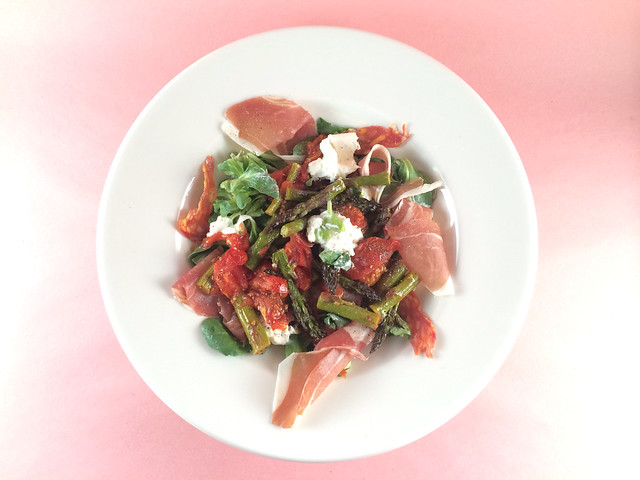 The original recipe calls for prosciutto but I already snacked on my half-pound bounty and only had speck left so I used that instead. I also had spicy soppressata so I tucked a few torn slices in to serve as the salt of the salad. foodiecrush also suggested some basil leaves but I skipped them, and used the mache leaves I had rather than arugula.

It was a very good salad. The umami of the tomatoes with the cured meats was unbelievable. The softness of the burrata tamed the saltiness down and balanced the overall flavor of the salad. I highly recommend to make this salad this summer to satisfy and impress.

1. Place asparagus spears and tomatoes in a bowl and drizzle with olive oil and season with salt, pepper, and chile flakes. Be a little light-handed with the salt, as the cured meats will lend their saltiness to the salad as whole. Transfer them on a baking sheet and broil for about 12 minutes or until asparagus becomes soft and tomatoes begin to brown. Remove from oven and let cool.
2. Assemble your salad. Make a bed of the mache leaves in a shallow bowl. Top with torn burrata and tuck in slices of meat here and there. Scoop in the asparagus and tomatoes. Drizzle in some more olive oil if necessary and sprinkle with pepper.