Summer came in late for us here in New York City. It’s already September and I’m only starting to see summer produce at the farmers’ markets. It was with some shock that I bought squash blossoms when I saw them at my Harlem’s produce stand one Tuesday morning while walking my dog Atticus. 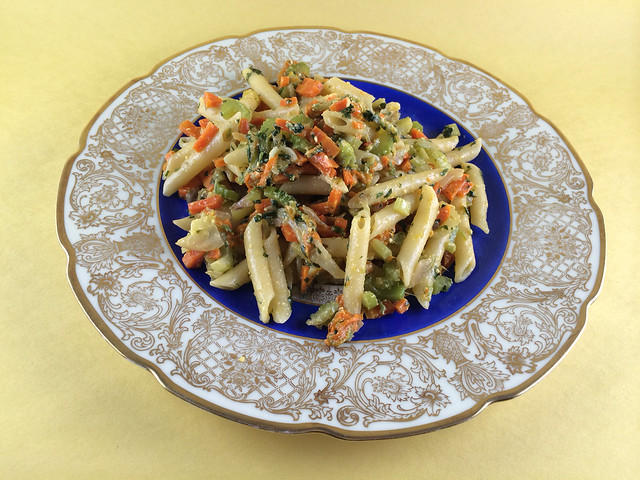 1. Put a large pot of salted water over high heat; this will be your pasta pot.
2. In the meantime, heat a splash of olive oil and the butter in a large skillet over medium heat. Sauté the red onion, celery, carrot, and parsley, stirring occasionally, until the vegetables are translucent. Add the zucchini blossoms, a pinch or two of salt, and the saffron, and stir gently to mix.
3. Add about 3/4 cup of broth, and stir to combine. Raise the heat to medium-high and add the rest of the broth a splash or two at a time, taking about 5 minutes to add it all. Stir frequently. Allow the sauce to simmer until most of the liquid has evaporated and only a thin film of thickened broth remains in the pan. Remove from the heat.
4. In a small bowl, whisk the egg yolk slightly with a fork. Meanwhile, cook the pasta until tender but al dente. When the pasta is almost ready, place the zucchini blossom sauce back over medium heat. Use a small measuring cup to scoop up about 3 tbsps of pasta water and, whisking constantly with a fork, gradually add the hot water to the egg yolk: together, they should make a loose, pale yellow liquid. Pour this mixture into the sauce in the skillet, stirring well. Scoop some cooked pasta into a serving bowl, and toss with the sauce. Top with shaved cheese.