Dal is often referred to as lentils but it’s actually the split version of lentils, peas, chickpeas, mung beans, kidney beans, and so on. The edible seeds of various leguminous plants are called pulses. If a pulse is split into half, it is a dal. 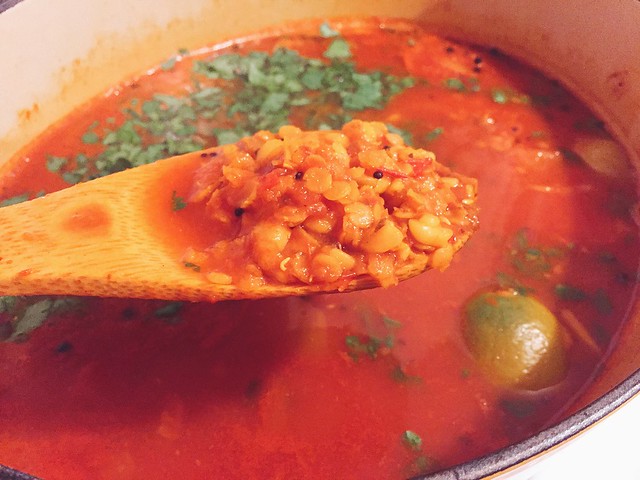 Rasam is a South Indian soup using tamarind and tomatoes as base. I added dal to make it meatier. For this recipe, I used an “Autumn blend” of brown, yellow, and orange lentils. I used 2 limes here to replace the tamarind’s sour note and deseeded the Serrano chile to keep the heat down. If you want to make a real meal out of this, buy some kebabs and serve with basmati rice and naan, like I did below. 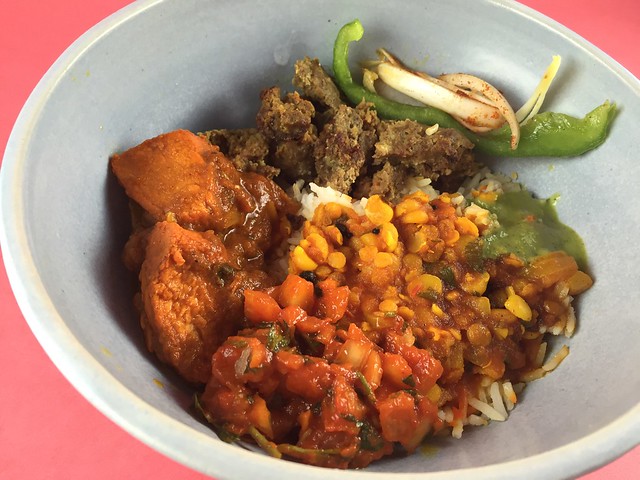 1. In a medium Dutch oven, toast cumin seeds and the peppercorns, and then remove to ground with a pestle.
2. In the same pot, heat clarified butter and toast mustard seeds. Cover the pot since the seeds pop. When they quiet down, add back the ground cumin and peppercorns. Be careful not to burn.
3. Stir and sauté in garlic, then chile, ginger, and the onions for about 5 minutes. Add the drained dal and turmeric and mix to coat.
4. Add the tomatoes and 4 cups of water. Stir and squeeze the lime into the pot without the seeds, and then throw in the spent lime halves. Season with salt. Simmer in medium heat for 30 minutes, stirring occasionally. Turn off the heat, remove and discard the lime halves, and mix in cilantro.

Recommended:
A bag of Pereg Gourmet Autumn Blend of heirloom lentils was $3 at my grocery store. Use the leftover for multiple salads and other lentil dishes.