Thanks to Christopher Kimball’s free Milk Street recipes every Tuesday, I always get an idea of what I can make for dinner that week. Za’atar is a Mediterranean spice blend that a lot of people use to grill meats. I was craving that grilled flavor, but because I don’t own a grill and I don’t really want to turn the oven on when it’s 90 degrees outside, I wanted some thinly-sliced meat that will cook through fast. 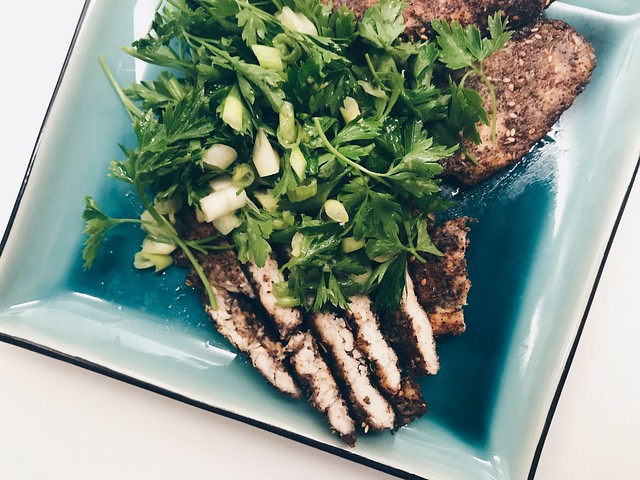 The Arabic word za’atar also means “thyme”, but I didn’t have it handy so I skipped it in my own version and just made do with what I had in my pantry. The cumin made the chicken very earthy while the sumac added that lemon tartiness that lightened up the whole meal. I really liked the parsley-scallion salad idea here–I never thought I can make a “salad” out of 2 simple ingredients. It was the perfect match to this very flavorful chicken.

1. Mix all your za’atar ingredients in a small bowl and transfer to a plate so it’s easier to coat the chicken. Set aside. Put the flour on a different plate and also set aside.
2. Pound the chicken so they’re thinner and faster to cook through. Lay plastic wrap on a chopping block and put the chicken side by side on top of the wrap. Cover with another sheet of wrap. Gently pound with a rolling pin or a heavy knife handle. Pound until the chicken pieces are about half a thumbnail thin.
3. Season the chicken with salt and pepper. Then cover with your homemade za’atar spices; shaking off the excess.
4. Heat a large skillet and add some oil until shimmering. Now cover the spiced chicken pieces with flour; also shaking off the excess. Then add them to the pan and fry each side for 3 minutes. Use a grill press if you have one to weigh the chicken down. Do this in batches if your skillet is not big enough.
5. Make your quick salad while cooking the chicken. In a bowl, combine the parsley and scallions, and season with some oil, zest, and lemon juice. Massage with your hands to mix well.
6. When the chicken pieces are golden brown, remove to a plate and top with the parsley salad.