I think it probably went into the freezer maybe a day after it died, said Carly when she gave me some venison meat her father and brother hunted in Pennsylvania. I’m never going to pass on fresh meat so I was quite glad to take some from Carly’s hands when she came back from visiting her parents. 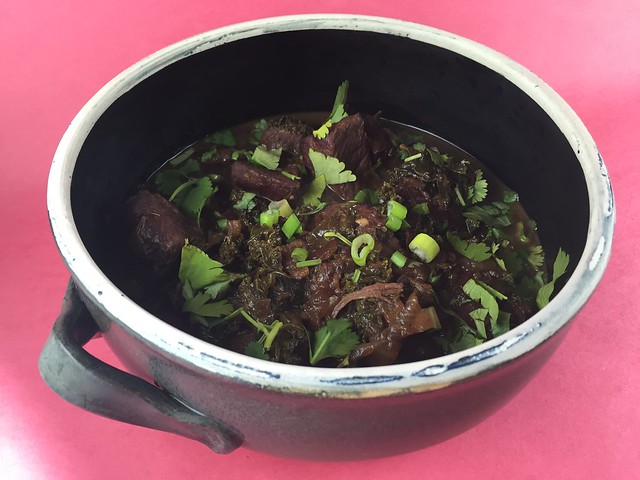 Ever since I did spring cleaning using the KonMari method of Marie Kondo, I’ve been trying to use up all the food I found in my pantry before I buy anything new. I found this bag of manti, or mini Turkish dumplings, and was told by my Turkish friend, Elle, that I cook them like tortellini and serve with a garlic yogurt sauce with butter and sumac. I don’t have any of those ingredients so I decided to use them with this venison stew in lieu of egg noodles or pasta. I also had leftover kale, parsley, and 1 lonely scallion in the fridge so I used them all up too. The kale made the stew a bit bitter here so I tried to repair it with some lime juice–also leftover–before serving. 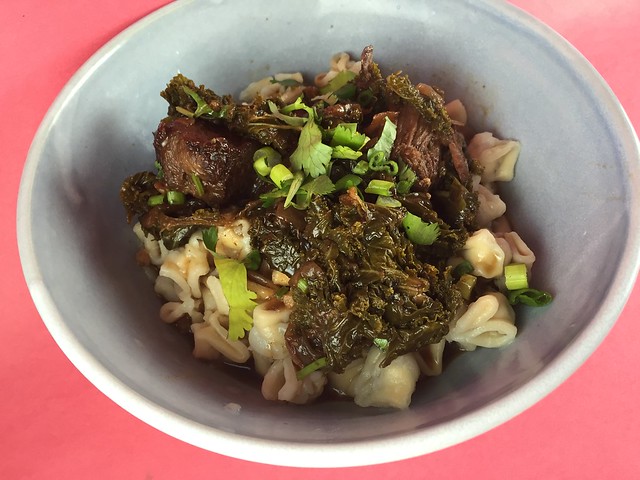 The venison meat is definitely not fatty; I can taste the gaminess and can tell how muscular the animal was since it’s been running around the woods. I thought a stout beer was perfect here, sort of like a carbonnade, or a traditional Belgian stew made with beef. (The Storm King Imperial stout beer was also leftover from a beer tasting, but you can use Guinness if that’s all you can get.) It was a hearty supper considering the temperature dropped back down to 20 over the weekend. 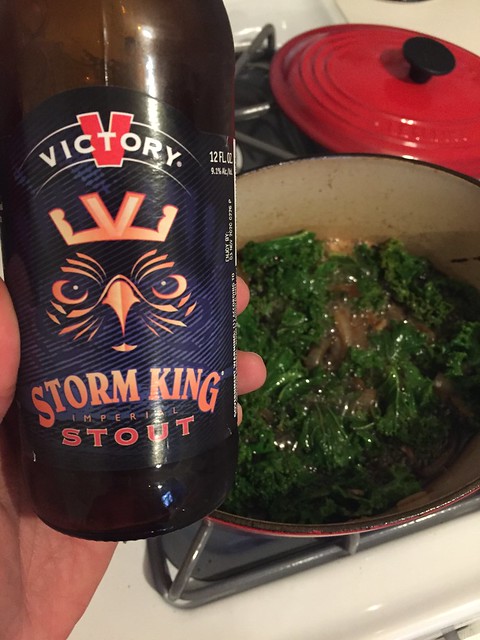 1. Dry the venison with paper towels, then salt and pepper generously. Heat a large Dutch oven over medium-high heat. Add the butter and bacon and cook until crispy. Remove the bacon with a slotted spoon and chop, reserving for later. Add the meat to the pot, in batches to avoid overcrowding, and raise the heat to high. Sear the meat well on all sides, then remove to a plate.
2. Add the onions and brown sugar to the pot and reduce the heat to medium-low. Cook, stirring occasionally, for about 20 minutes, or until the onions are soft and caramelized. Sauté in the garlic and the kale and cook until the leaves are wilted.
3. Raise the heat to medium-high. Pour in the beer and scrape the bottom of the pot with a wooden spoon to loosen any brown bits. Bring to a boil, then add the crispy bacon and the venison along with its juices. Add enough chicken stock to cover the meat, then the bay leaves and thyme. Reduce the heat, cover, and simmer until the meat is very tender, about 2 hours.
4. Uncover the pot and raise the heat to medium to reduce the liquid to a sauce-like consistency. Before serving, adjust the taste by adding salt and pepper and lime juice. Serve with pasta, rice, or noodles, and sprinkle with parsley and scallions.

Recommendations:
Amazon sells venison stew meat, you know, if you don’t have good friends who come from hunting families. The Marie Kondo book, The Life-Changing Magic of Tidying Up: The Japanese Art of Decluttering and Organizing will change your life.